The History of Valentine’s Day in Other Countries

Valentine’s Day was initially considered a day for lover’s to mate. A brief look into the day’s history suggests that Roman Paganism and the Catholic Church had something to do with its origin.

The earliest origins of Valentine’s Day suggest that it was associated with Lupercal’s feast during the 4th century BC. This pagan festival celebrated nature. It was held to honor Juno, the queen of Roman gods & goddesses. She was the goddess of marriage and women too and honoring her was considered a fertility rite. This celebration included a lottery where teenage girls’ names were drawn from a box. This was followed by an arbitrary matching with men for the remainder of the year.

But it is the Christian priest St. Valentine who holds the honor of having the most well-known legend. Legend has it that the then Emperor, Claudius II, had outlawed the marriage of young men since he believed it would make them better soldiers. Valentine fought this injustice and continued marrying young lovers. He was exiled in 270 AD as a result of this. Official records show that Feb. 14th was declared an official holiday for the church in memory of St. Valentine. This was till 1969 when Pope Paul VI took it off the calendar of the church.

Looking into this in great depth will reveal that the spread of Valentine’s Day throughout the world is proportional with the replacement of Paganism with Christianity. So this might just have been the Church’s way to Christianize the celebrations of Lupercal’s feast. And the only appropriate choice at the time probably was Valentine.

This concept probably only made it to North America during the 19th century when British settlers made their way here. Even though Valentine’s tale is ambiguous at best, they do highlight him as a heroic and romantic figure.

Apart from the U.S., Valentine’s Day is currently celebrated in France, Australia, the United Kingdom, Mexico, and Canada as well. With remarkable improvements in printing technology during the 19th century, small tokens of appreciation were replaced by printed cards as a way for people to express their emotions towards another. The direct expression of one person’s feelings towards another was discouraged at this time. The popularity of sending cards also increased when postage became cheaper. Today, more than 1 billion cards are exchanged on Valentine’s Day and women account for 85% of these purchases.

What are your plans for Valentine’s Day? Don’t have any? That just won’t cut it. Plan a romantic day for that special someone in your life. Even if you can’t come up with something unique, the simple dinner and a movie works quite well too, and don’t forget the black and white cookies.

by blackandwhitecookiesPosted on February 12, 2015 Posted in Cookies, Valentine's Day No Comments 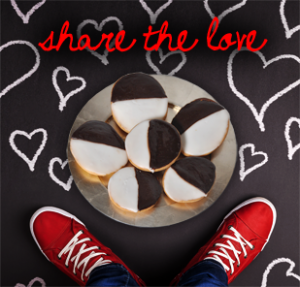 At The Black and White Cookie Company, we think of our delicious cookies as a symbol of two individual halves uniting to form something special, unique and better together than apart. We encourage you to share the love this Valentine’s Day, whether it’s with your sweetheart, a best friend, your teacher, a family member, your favorite barista or anyone who has touched your life and made it better. Just like a Black and White Cookie.