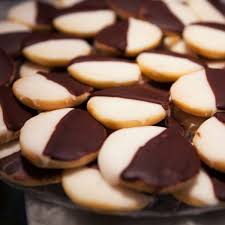 Pastries have been closely associated with New York City for a very long time now. But there is perhaps nothing more closely associated than black and white cookies. These flattened fine textured domes of cake with their vanilla fondant and chocolate coating, neatly bisected through the middle in order to separate the flavors, aren’t really cookies but more like “drop cakes,” a term used by William Grimes in a New York Times article from 1998. A lot of people say that these cookies have descended from another popular type of cookie from upstate New York, the “half-moon.” This baked cookie has a base, shaped like a cookie, made from chocolate or vanilla cake. It has a fluffy layer of frosting on the top and has a demarcation with some chocolate and vanilla. The layer of chocolate frosting is usually the thicker one. There are rumors that this type of cookie was invented in the 20th century at the Hemstrought Bakery but its archaic form and iconography suggest that it a lot older than that.

The term cookie comes from koekje, a Dutch word, which is pronounced in almost the same way as the English equivalent. It basically means “little cake.” This suggests that it was the Dutch settlers who brought the concept of cookies to the country during the 17th and 18th centuries.

The transformation of cake cookies using fondant instead of frosting just makes it more streamlined and modern. This is what makes it ready for large-scale distribution without any fear of frosting or smearing. Yet, the half-moon image still remains as a medieval symbol that represented the midpoint of every lunar cycle. This is a great reminder of the north European past of New York City.

Today, these cookies are widely available in a number of bakeries, bodegas and bagelries around the city. They retail for around $3 each and average somewhere near 4 cm in diameter. There are some which have been oddly transformed too, though.

Now, here is a list of five events where taking black and white cookies along makes sense:

If you are going out for a picnic with family, friends or co-workers, taking some of these cookies along makes perfect sense. They are easy to carry around and taste like little drops of heaven in your mouth. There really is no better snack for the young and the old.

When you’re stuck in a car or RV with your family members or friends for a long period of time, you are going to get hungry on a few occasions at least. These cookies can really come in handy when those hunger pangs hit in the middle of nowhere.

Everyone enjoys a good old-fashioned barbecue. But while the meats are cooking on the grill, guests may feel a little hungry. You wouldn’t want to give them something heavy that ruins their appetite. But you would want to offer something tasty. Black and white cookies are a perfect choice.

If you are a part of a book club and never know what to serve other members when they come over to your house, these cookies are the perfect solution.

Believe it or not, both children and adults love these cookies. They make the perfect snack for kid’s parties.

So what are you waiting for? It’s time you went and go yourself some black and white cookies.